Corps Members’ Mission to Save Lives


Corps Members’ Mission to Save Lives
A Report by Oluwafemi Ogunjobi.

For more than 5 hours, the ever bustling Buruku Market Square of Benue state was brought to a halt for a free health mission. Last Saturday, traders and artisans left everything to attend to health issues. As if on cue, when the medical team of Corps members arrived at the Youths Centre, many market women and petty traders rushed out to be treated. 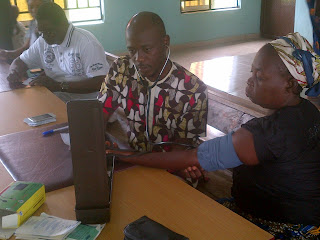 It was organized by a Batch “C” 2015 Corps members of the Millenium Development Goals, in collaboration with National Emergency Management Agency Community Development Groups and Buruku General Hospital, to prevent death from Malaria and HIV/AIDS. The programme was tagged ‘’Here-To-Heal’’ Medical Clinic.

The Corps members, led by the President, Oluwafemi Ogunjobi, explained that the Medical Outreach was borne out of the need to Reduce Child Mortality, Improve Maternal health, and Combat HIV/AIDS, Malaria and other diseases in the riverine community.

‘’Buruku is a riverine community, with  prevalence of Malaria, HIV and other concomitant infections. What we have done as youngsters is to identify with these people, and connect them to the right source of treatment, as the Medical Outreach will focus on general body checkups, diagnosis, administration of drugs for proper medication and health counseling. 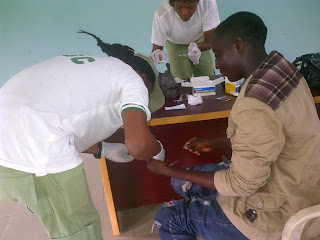 The large crowd here underscores the massive need for this kind of service, which should be adopted in a sane society” Ogunjobi said.

The NYSC Local Government Inspector of the community, Mr. Malong Sauki praised the Corps members for embarking on the health mission, urging others serving in the state to emulate them.

The Medical team for the event was led by Dr. Gabriel Owoicho, a specialist at General Hospital, Buruku. Owoicho also commended the corps members while urging them to do more. “This medical mission is the first of its kind in this community, and a laudable social enterprise intended to meet critical health needs; we shall continue to provide needed support to expand its reach to more people in the state.”

The participants at the event were diagnosed of Malaria, HIV, and given free consultations, drugs, and mosquito nets. Medical supplies were got from health facilities in Oyo state, and also from the General hospital, Buruku. 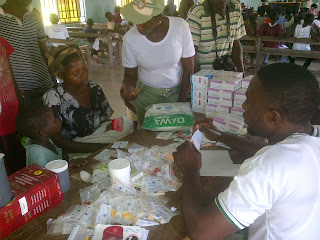 One of the beneficiaries, Joo Terlumun, explained that 'one of my children have been suffering from Malaria for some months now, but our family is short of funds to purchase the required drugs. I am glad that corps members in this community could come up with this initiative that has brought good health closer to us.’

Another beneficiary, Mr. Terkimbi, said, ‘’ I came all the way from Tyogbenda for this medical outreach, there are many people like me who have high blood pressure but who don’t know about it. I was counseled on what to do to be healthy. I thank the Corps members for organising this kind of programme in the community.’’